Charting the Stars across Space and Time 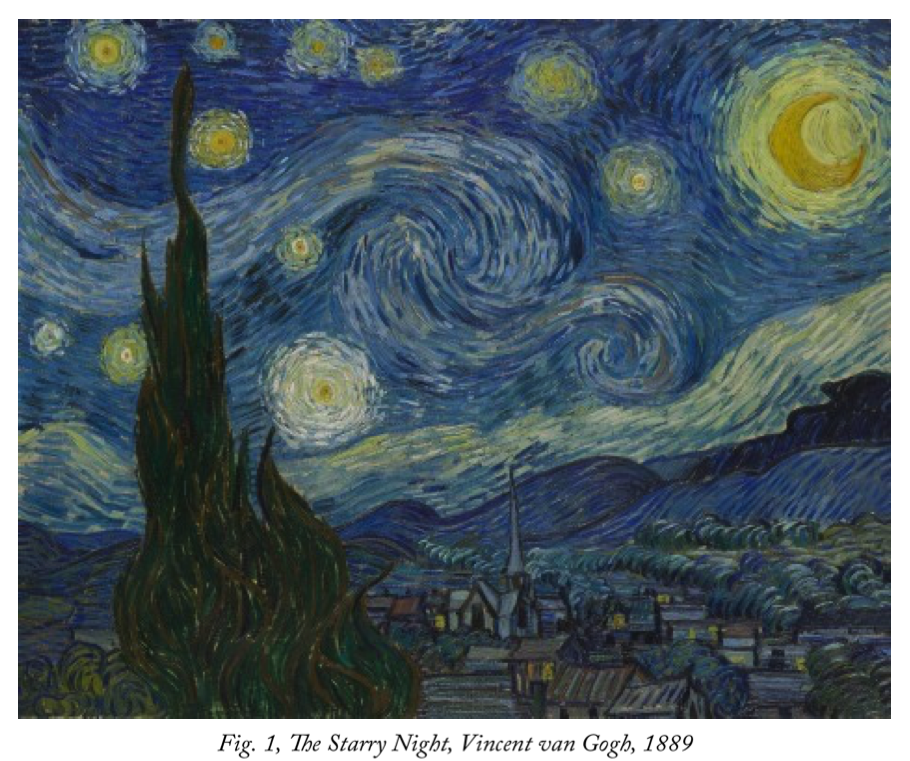 Ingrained in human nature is the compulsion to create and re-create, whatever it may be. Works of art, then, do not exist in a vacuum only to be received by an audience. Rather, the works are the agency of their creators to call a response from their receivers, and these works can become agents in themselves long after their creators have passed and can no longer testify to them. The great power and scope of this agency can be observed today through the digital world, where time and space need no longer be boundaries for inquiry. While the original Starry Night by Vincent van Gogh now resides in the Museum of Modern Art in New York, its presence lives on without end in our culture as particularly evidenced by its digital footprint. Using Laurie Gries’ methods for digital image tracking, I have selected Starry Night as just one example through which to examine and give evidence to the capabilities of digital iconographic tracking methods, the many ways images can be adapted and transformed in digital spaces, and the overall nature of human creation.

The late 19th century brought a new wave of understanding in how we view the world. While the sciences were making their breakthroughs, the arts were reconfiguring themselves. Rather than seek to capture the physical reality of the world and rely upon old conventions, the Impressionists sought to capture the personal artist’s emotional impression of a scene or collection of scenes and moments. Post-Impressionists, then, took this crossing of accepted boundaries a step beyond by even further and more explicitly separating from, yet still representing, reality. Dutch artist Vincent van Gogh has over time become the common poster child for post-Impressionism. A combination of masterful works and an iconically tragic life have aided in his posthumous success. Possibly the most famous of all his works, The Starry Night, painted in 1889, captures quite well the harsh and contrasting, yet ever-moving characteristics of post-Impressionism, serving in conjunction as a representation of Van Gogh’s internal emotional struggles. I would propose that the continued fame of this work can be attributed to a universal sense of dreamlike wonder, as represented in the illuminating sky, contrasted with a more muted reality, as expressed through the quiet village below, with a bold bridging of the two through a cypress tree.

However, this general connectedness to human nature is not the sole cause of the painting’s perseverance today. Van Gogh sadly never lived to see his success outside of his artist colleague circle. It is all thanks to Van Gogh’s sister-in-law, Johanna van Gogh-Bonger, who took up the cause to promote and make a living of selling his over 2,000 works soon after his death and the death of his brother and her husband, Theo. She learned all she could about art trade before and after Theo’s death, which aided her in becoming Vincent van Gogh’s first worldly advocate. Without her, there would be no cultural icons, both in the works themselves as well as the brilliant yet troubled artist himself (Righthand). The age of the internet only picked up where other dreamers left off in their pursuit of exploring the clash between otherworldly dreams and reality.

In order to more fully understand and grasp the modern cultural impressions left by The Starry Night, I employed a number of digital iconographic tracking methods. The purpose of these methods are to both (1) follow the ways in which the work has been transformed through circulation and (2) identify its consequential effects (Gries 337). My research has been modeled after Laurie Gries’ iconographic tracking methods and guidelines, taking a “new materialist approach” in order to “pa[y] special attention to an image’s collective experiences after it is initially produced and begins to circulate” (338). In other words, the characteristics of the circulation itself give the image its contextual meaning and purpose, or rhetorical life. My goal, then, is to seek out how The Starry Night has been, and continues to be, transformed and circulated throughout our modern digital culture as a cultural icon and to identify the significant social and cultural implications of its circulation.

Following Gries’ methods for image tracking, I first began the stage of data hoarding as a macro-scaled approach in order to curate a large data set (339). I initially gathered 100 images through a Google search of “Starry Night” in order to observe and locate possible “patterns, trends, and relationships” (Gries 339) among the set and collected them in a saved Google images collection. After gathering a general overview of these potential insights, I began the next step of data mining by “generating key terms, or tags, which function to make relationships and trends visible” (Gries 339). I began to develop my tags to both identify how the image is being transformed (such as remix or pop culture), its digital context (such as purchase-able or social media), and its format type (such as video or GIF). As part of my data mining process, I also utilized a meso-scaled approach in order to better diversify the related images to Starry Night being gathered (Gries 340). This recursive process of assembling a well-rounded collection included varying my key search terms to better reflect the detected potential trends and image formats by running them through multiple search engines, upon Gries’ recommendation (340). Therefore, I expanded my key search terms to five specific items: (1) “Starry Night”, (2) “Starry Night Van Gogh”, (3) “Starry Night GIF”, (4) “Starry Night Remix”, and (5) “Starry Night Parody.” I also utilized three different image-based search engines: Google, Bing, and Imgur. In order to gather consistent data in relation to the variety of key search terms, the number of images collected per key search term were proportional to the total number of images preselected to collect from each search engine. While it may initially appear to be disproportionate that the total number of images collected per search engine is not the same, I considered their overall digital and cultural influence as a major indicator of which engines should require more attention in correlation to their general usage and database potential. Because of this, 30 images were collected from Google, 20 were collected from Bing, and 10 were collected from Imgur to give a total collection of 60 images for analysis. Because of my relatively small collection, I did not see the need to create entirely separate folders focused on emerging significant categories such as Gries (340). However, I did collect all of the images, their URLs, and their subsequent tags in three tables as seen in Appendix A. My 16 emergent major tags became the following: blog post, created, remix, pop culture, reimagined, recreated, city, social media, daily use, art reference, video, process, GIF, image sharing, commentary, music.

I selected Van Gogh’s The Starry Night as my image to track out of an already, albeit very general, awareness of its widespread cultural presence. I had seen it replicated often on posters, sidewalk chalk art, and even hand painted on backpacks and other personal items. While I always had generally admired the painting, its popularity had long gone overlooked in my eyes as nothing more than an icon to promote a sense of “artsy-ness” with no other awareness of its expanded cultural presence. In my tracking, I was intrigued to discover the vast amount of remixing, which I will define as any way in which the essential features of the original work have been altered in any way, has been done. Over half of my collected images, 36 to be exact, qualified as a remix. Related to remix, I also identified “reimagined,” of which 15 have been tagged, as a key term to distinguish from “remix” in that reimagined images still adhere to the key visual elements of The Starry Night without any new additions yet still involve some alteration such as materials or exact style. 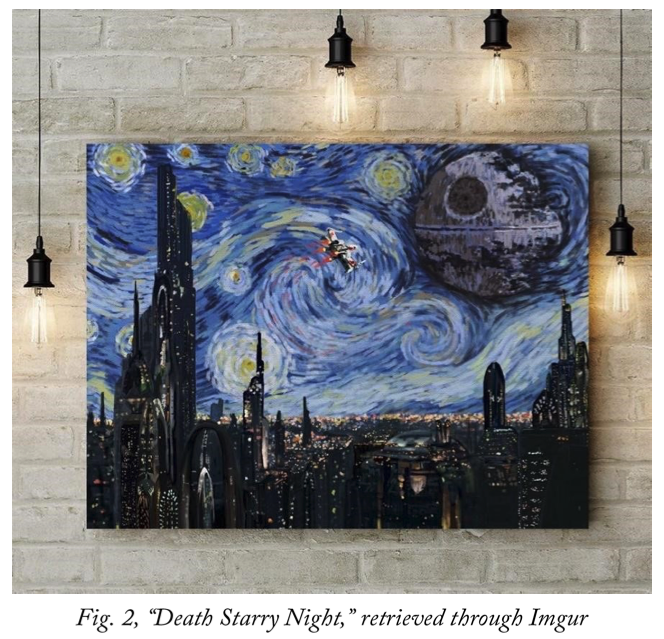 These transformations both uphold and further develop my initial perception that The Starry Night inspires participatory acts in others as a way to take part in the work’s fame.This discovered cultural phenomenon can also have a significant duality of incorporating other pop culture references as an extension of remix in a similar participatory spirit. Pop culture references account for over half of images tagged as “remix”, meaning about a quarter of my total images are pop culture remixes of The Starry Night. The references most worth noting for occurring more than once are all long-standing yet very diverse cultural icons, including Batman, Godzilla, Peanuts, Star Wars, Doctor Who, and other famous works of art. An example, Death Starry Night, exhibits this fine art/pop-culture remix (figure 1). These combinations suggest a social desire to both preserve and take part in cultural icons new and old as a way to validate their relevance. 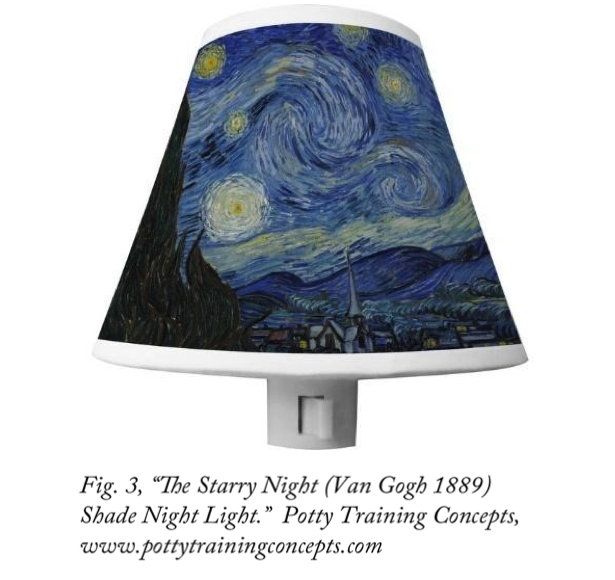 This desire to integrate an older yet still modern work of art, considering The Starry Night’s current residence at the Museum of Modern Art, with contemporary icons of today is reflected yet again in a participatory culture. A significant number of results traced to websites, such as iCanvas, Fine Art of America, Etsy, Redbubble, and even Amazon to name a few gave cause to tagging the images from which those sites came as having the ability to be purchased and thus pass on a derivative ownership and transactional nature. Another way to view this is through the ways The Starry Night and its remixes have been imposed onto physical objects for daily usage in an inexhaustible variety of ways, some from my data collection including a lamp shade nightlight (figure 2), a shower curtain, a phone case, a mouse pad, a wrist cast, a car, and even edible items. The increased accessibility of the painting through our digital technologies, especially in part to social media (and in particular the site Pinterest during my data gathering), has aided in tearing down the barrier between fine art as a separate aspect of culture. A threshold of entry through social and economic means no longer exists in order to claim and showcase some level of ownership in this work, both physically and culturally. Now, we are perhaps able to live to the fullest extent the Impressionists’ and Post-Impressionists’ dreams of a world where human expression through art and daily life completely intersect.

While many features of The Starry Night facilitate ease of transformation and remixing today, some key aspects remain, although slightly less visible. Humans have always been fascinated and drawn to the stars for both inspiration and guidance. I consider it no wonder, then, that the same moving and awe-inspiring stars most likely still visually draw onlookers to this image. There is more than meets the eye, however, in how this scene still resonates in similar ways over a century later. As mentioned in the introduction, Van Gogh’s contrast between an average countryside scene filled with familiar images of Van Gogh’s life and the inspiring fantastical heavens above are the most essential features of painting. The Starry Night, through its digital/cultural movement and endless transformation, now itself enacts and serves as an iconic representation of the contrast Van Gogh perhaps sought to capture in this single scene. Consider the nostalgia and familiarity of the pop culture images used in remixes, which can be compared to Van Gogh’s familiar and easily recognizable village. Famous cities can also be included in this familiarity too as their own remixes found their way into my data collection as well. These common culturally shared icons are often contrasted with bright colors and swirling motion to converge what is real and what could be. Through technology and an ever imaginative yet appropriative human nature, The Starry Night by Vincent van Gogh will truly live on as an example of the relativity of artistic ownership in participatory cultures. 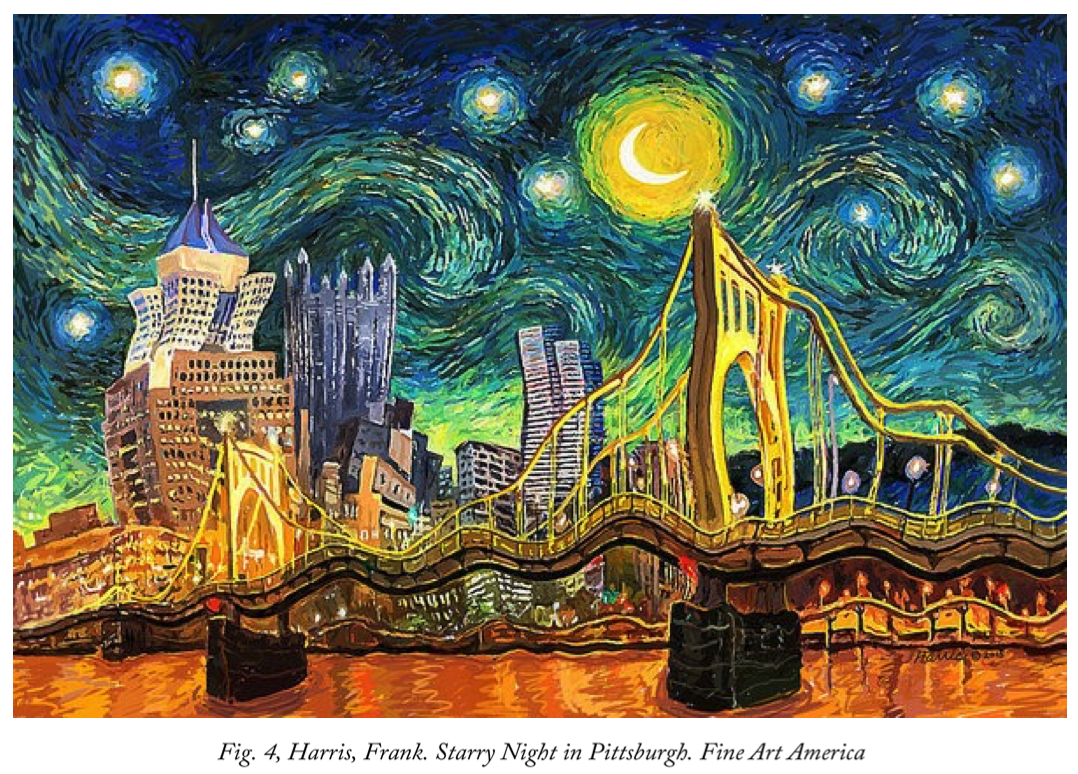