One of the more easily observable markers of modern identity—more in the working and upper socio-economic classes—is purchasing habits. Which products an individual buys, or potentially does not buy, can be indicative of personal preferences, conceptions, beliefs and ideologies, and more; these, of course, includes gender. Products that best display this significance are those developed within the beauty industry. From hygiene to makeup to hair to fragrance, the primary exigence of the beauty industry is self-image: how an individual sees themselves and wants to be seen by others. Out of the countless array of beauty products available in the current market, fragrances exhibit in their marketing specifically targeted gender rhetoric. This visual essay offers a closer look at the details, which may frequently go unnoticed, that are involved in the selling of perfumes and colognes. With contemporary insights from Chandra Mohanty, Ph.D. and Christine Venzon, features like bottle design, flavor text, and buzzwords are contextualized by the perception of gender binary: what is masculine, what is feminine, and is there room for anything “other?”

...are mainstays in the modern, public sphere. As a standard of good hygiene and grooming, having an appealing scent is a facet of social identity that can—quite literally—enter the room ahead of oneself. Out of the endless aromas available, the decision of what scent a person chooses to wear can display quite a deal about the wearer’s personality; however, a much more specific revelation about anindividual’s expressed gender is found within their decision of which scent to purchase. All products in global commerce are marketed, one way or another, including the scents we choose to express ourselves with. Fragrances are marketed primarily to two target audiences: men and women. Though not expending much necessity to the biology of sex, the promotion of a fragrance as either “for men” or “for women” enforces the concept of gender binary. Visually, this binary is expressed on the product itself by way of the bottle design and the flavor text of the fragrance.

As a result, this policing of gender binary through fragrances affects the consumer experience of individuals of male/female binary, inter- gender, and non-binary identities both by the product on the shelf and beyond in the retail environment in which it is sold.

Defining the "Binary" and the "Other"

Gender, as a concept, shares a mistakenly congruous connotation with the concept of sex. Both understood as elements of individual identity, biological sex initially delineated two separate individuals of humans, based on similar physical characteristics—primarily evidencing the reproductive features. This distinction, shown as early as within the Politics of Aristotle, led to the presumption and assignment of separatepersonality characteristics to the “male” and “female” sexes. These characteristics, associated with respective biological sex, would lead to the concept of gender—the outward expression of identity in relation to biological sex and combined mitigating factors such as culture, economic status, social interactions, interpersonal relationships, psychological climate, and more.

The trouble, then, becomes when this application of gender in relation to a two pole binary (“male” and “female”) is utilized as a method of qualifying transgender, non-binary, inter-gender, and other individuals whose identity does not conform to or along the polar opposites of “male” or “female.” One such occasion of this problem of gender binary is observed in the marketing of fragrances. As detailed further, the chemical composition of a fragrance—whether a perfume, eau fraiche, eau de toilette, or cologne—does not innately bear a resemblance to either binary pole. However, the manufacturing of the fragrance participates in the discourse of and problems with gender binary once it is marketed. The marketing that will be examined, here, will be that which is included with the physical product—that is, the bottle design and the flavor text found on the box of the product—whereas, an individual who identifies with a nonbinary-conforming gender would be hesitant or intimidated by the gendered marketing utilized to promote the product, itself.

The social symbolism of cosmetic fragrances was first introduced by the women of Ancient Egypt. Female entertainers of wealthy households would grind lotus and other aromatic herbs together and form perfume cones. These perfume cones would be worn on the head of the entertainer and as she would sweat, the fragrance would be released. From this, the Ancient Greeks popularized the extracting of fragrant essential oils of roots, berries, and other plants into aromatic oils intended to be worn on the skin. Furthermore as people throughout history began to prefer more and more exotic ingredients, wearable fragrances became a luxury item that could only be afforded and obtained by the high and upper-middle classes of society (Buchan). As the scent profiles of fragrances became increasingly sophisticated, distinctions in the types of fragrances also came into play. By today’s standards, perfume is generally marketed to women and cologne to men; yet chemically, gender has nothing to do with it. The classification of eau frâiche, cologne, eau de toilette, eau de parfum, and perfume all has to do with the ratio of water to alcohol to scented oil within the fragrance’s composition (RawChemistry). 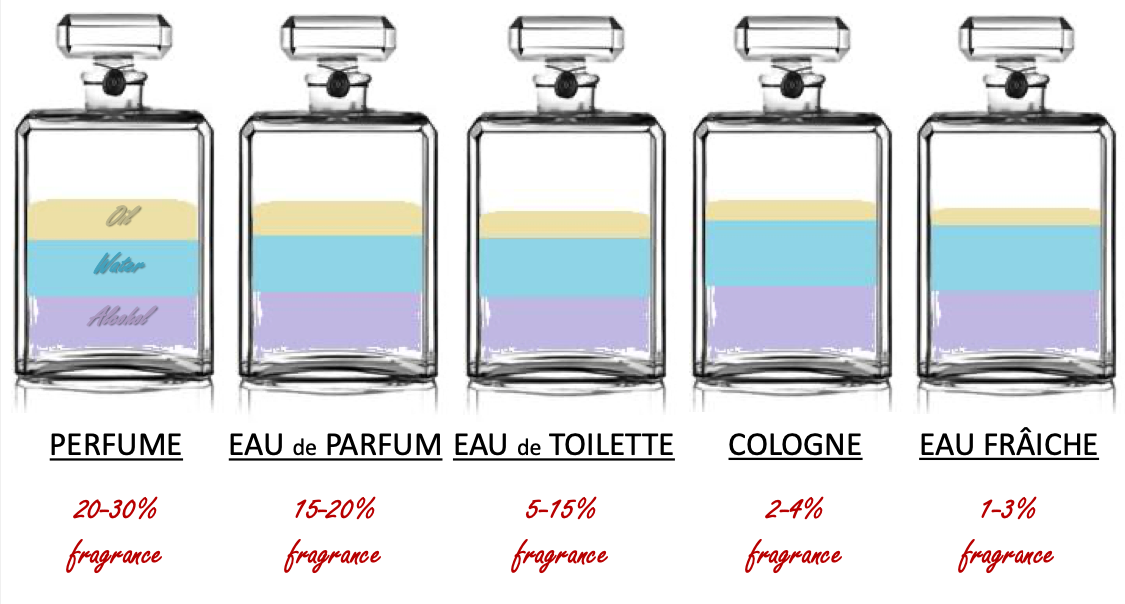 In a historical sense, cologne was typically worn by men as it is lighter and less of a burden when conducting manual labor; whereas, women who stayed primarily within the home were reserved to the heavier perfume (Venzon). Sociologist Marcello Aspria describes that in 19th Century Europe, “men and women made equal use of perfume under aristocratic rule, [yet] among the new bourgeoisie it was absolutely not done for men to spend their money on such ‘wasteful frivolities’” (Victoria, Bois de Jasmin). Gender binary only works its way into fragrance by way of marketing, done in part to narrow the target audience of the product—rather than selling to every consumer, costs are cut by appealing to one “half” of the demographic at a time. This enforcement of binary is displayed by specific visual cues like bottle design. 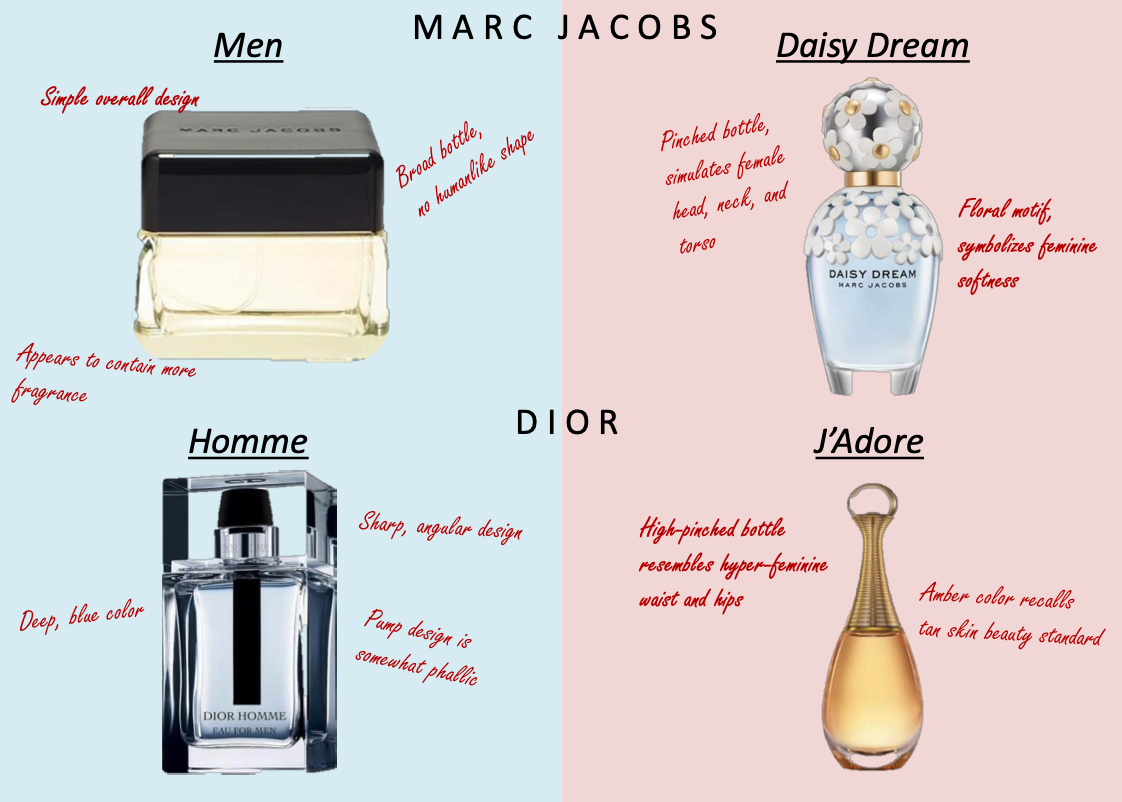 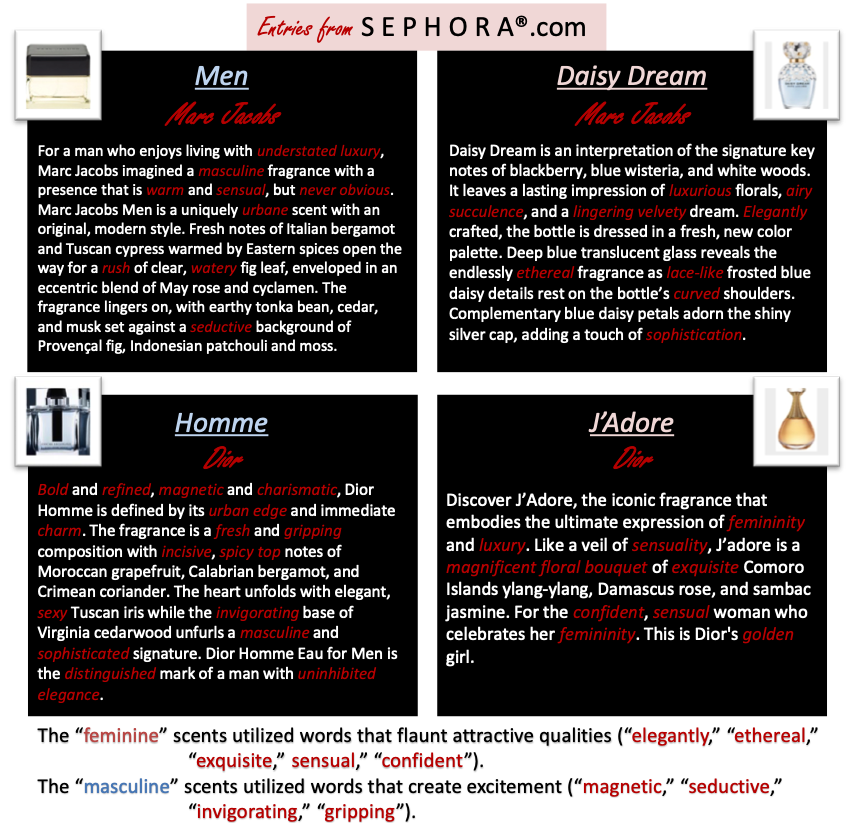 As one of the five senses, scent delivers important information about its wearers. Whether relaying cues of sexual preference or personal hygiene, choice of fragrance often reflects expression of gender identity. As Chandra Mohanty explains, much of modern perception of gender is authorized by capitalism: you are what you buy because its sold to you that way (3). The fragrance industry is no exception. From bottles crafted with hard angles or pinched curves to flavor text flaunting sexuality or excitement, marketing is able to transform the genderless interpretation of fragrance into a masculine or feminine binary. As a product of this, such marketing creates a connotative opposition between perfume (female) and cologne (male), when the only difference between the two products is their respective oil contents. Understanding this dynamic can hopefully see to the development of non-gendered fragrances, where an inter-gender or non-binary individual can purchase a new scent without the stigma or added pressure of binary marketing.

Buchan, Ella. “Perfumes: Where Do They Come from?” The Telegraph, Telegraph Media Group, 11 Apr. 2018, www.telegraph.co.uk/beauty/skin/creed.

RawChemistry. “What Is the Difference between Cologne and Perfume?” RawChemistry.com,Raw Chemistry, 22 Jan. 2018, www.rawchemistry.com/what-is-the-difference-between-cologne-and-perfume/.